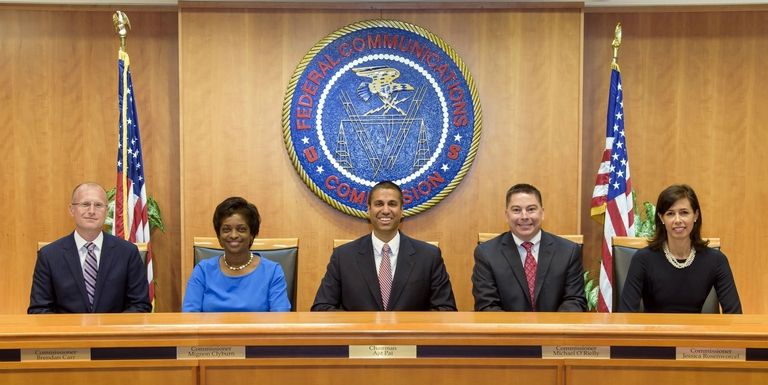 In a controversial vote, the FCC rolls back net neutrality rules adopted in 2015 and strips the agency of its authority to regulate the internet.

In a controversial vote, the FCC rolls back net neutrality rules adopted in 2015 and strips the agency of its authority to regulate the internet.

The Federal Communications Commission voted Thursday to repeal Obama-era net neutrality rules, handing the broadband and wireless industries a big victory in their battle against government oversight of the internet.

The Republican-led FCC voted 3-2 along party lines to dismantle the 2015 regulations, which ensured all traffic on the internet is treated equally, and prevented broadband and wireless providers from blocking or slowing online content. The agency also voted to eliminate the legal foundation that gives the FCC oversight over internet service providers.

The vote was delayed briefly while security at FCC headquarters cleared the room.

Republican Commissioner Brendan Carr called it "a great day for consumers, for innovation and for freedom." He said the vote returns the FCC to a light regulatory regime that had worked for 20 years until they were changed in 2015.

The Federal Communications Commission voted Thursday to repeal Obama-era net neutrality rules, handing the broadband and wireless industries a big victory in their battle against government oversight of the internet.

The Republican-led FCC voted 3-2 along party lines to dismantle the 2015 regulations, which ensured all traffic on the internet is treated equally, and prevented broadband and wireless providers from blocking or slowing online content. The agency also voted to eliminate the legal foundation that gives the FCC oversight over internet service providers.

The vote was delayed briefly while security at FCC headquarters cleared the room.

Republican Commissioner Brendan Carr called it "a great day for consumers, for innovation and for freedom." He said the vote returns the FCC to a light regulatory regime that had worked for 20 years until they were changed in 2015.

The vote marks the latest twist in an 18-year debate over how the internet should be regulated or even if any rules are needed to make sure companies offering internet access don't act as online gatekeepers.

One side says the Obama-era decision to classify broadband as a public utility ensures the FCC can establish enforceable rules to protect an open internet. An open internet means no fast or slow lanes and ensures free speech is protected online. The view is supported by consumer advocates, internet companies like Facebook and Google, and nonprofits, including the New York Public Library and First Amendment advocates like the American Civil Liberties Union.

On the other side of the debate are cable operators and phone companies, like AT&T, Comcast, and Verizon, who say that treating broadband like the old telephone network hurts investment and stifles innovation.

The repeal of the rules was spearheaded by FCC Chairman Ajit Pai, who was named ahead of the agency earlier this year by President Donald Trump. He has called the rules "heavy-handed," and contends that they've deterred innovation and depressed investment in building and expanding broadband networks. He said ditching the rules and reinstating the previous broadband classification is a return to the FCC's "light touch" approach to regulation that started under former President Bill Clinton.

"Returning to this legal framework is not going to destroy the internet," Pai said in his statement. "The internet as we know it is not ending. This will not destroy democracy ... Americans will still be able to access sites they want to visit and services they want to use. There will still be cops on the beat the way things were prior to 2015."

FCC authority gutted
In scrapping the 2015 rules and reinstating a non-regulated classification to broadband, Pai has abdicated much of the FCC's authority and handed oversight to another federal agency, the Federal Trade Commission.

Pai argues this puts broadband companies on the same footing as internet companies, like Google and Facebook, which must also abide by FTC guidelines. Under this framework, he says the FTC will be able to protect net neutrality by enforcing antitrust law and broadband providers' terms of service, which he expects will include voluntary promises to abide by net neutrality principles.

But net neutrality supporters say these protections are insufficient because the FTC only considers harm to consumers after it occurs, rather than trying to prevent harm, as the FCC rules were designed to do.

"With this vote, the FCC is getting out of the business of consumer protection and promoting the public interest entirely," said Gigi Sohn, an aide to former FCC Chairman Tom Wheeler, who architected the 2015 rules. "The complete abdication of the FCC's oversight over broadband internet access will leave every American internet user out in the cold."

A handful of states, including California and New York, said they would challenge the move through a combination of possible legislation and legal action.

The move takes the US out of the international trend toward ensuring all internet content is treated equally. The EU has had net neutrality protections since 2015 and tightened its guidelines last year. The Netherlands and Slovenia have adopted even stronger rules.

Other countries like Chile and India also have adopted some form of net neutrality, while several others have been considering regulation.

If US service providers charge companies extra fees for faster service, however, consumers may face higher prices if those costs are passed on. US companies, like Netflix and Amazon, have customers around the world.

Public outcry
The public outcry over the repeal of the rules has been swift and loud. Opponents of the rule change say it gives too much control to big broadband and wireless companies and would allow these players to act as gatekeepers to the internet, deciding which services and websites consumers access and which they cannot.

Groups such as the ACLU, American Library Association, and others have sent letters to the FCC and Congress opposing the measure. Tech companies, including Amazon, Etsy, Kickstarter, Mozilla, and Vimeo, have joined in online protests. And several notable tech pioneers, including Vint Cerf, a founding figure of the internet; Steve Wozniak, a co-founder of Apple; and Tim Berners-Lee, the inventor of the World Wide Web, signed a letter admonishing the FCC for its plan and asking that the vote is delayed.

"You don't understand how the internet works," the open letter posted on Tumblr said. "The FCC's rushed and technically incorrect proposed order to abolish net neutrality protections without any replacement is an imminent threat to the internet we worked so hard to create."

The public seems to agree. More than 80 percent of respondents in a University of Maryland poll released this week said they opposed the proposal. The university's Program for Public Consultation conducted the online survey in early December of 1,077 registered voters.

Still, others say that the process undertaken by the FCC has been hurried and flawed. More than 20 million comments were filed at the FCC on the proposal, although at least 2 million of those comments have come from fraudulent accounts, reports indicate.

As a result, 19 states attorneys general, including New York Attorney General Eric Schneiderman, FCC commissioner Jessica Rosenworcel, and 28 US senators asked the FCC to delay its vote to give investigators time to look at the fake and fraudulent comments. But the Republican majority went ahead with the vote anyway.

"I think our record has been corrupted and our process for public participation lacks integrity," Rosenworcel said in a statement. "Identity theft is a crime under state and federal law -- and while it is taking place this agency has turned a blind eye to its victims and callously told our fellow law enforcement officials it will not help."

Industry backers
Broadband providers have tried to reassure the public that they have no intention of harming customers' access to the internet. Michael Powell, a former FCC chairman who now leads the cable industry's trade group, told reporters on Wednesday that broadband providers have no economic incentive to block or slow down access to the internet because it would hurt their business.

And he tried to reassure the public that their internet experience will remain unchanged.

But Rosenworcel said during the FCC meeting that broadband companies do have "the technical ability and business incentive to discriminate and manipulate your internet traffic." And the repeal of the rules "gives them the legal green light to go ahead and do so," she said.

Still, Powell and others in the industry have said net neutrality will be maintained even without rules. Their opposition was to the reclassification of broadband as a utility that wags used to create the rules. They say rules, which were developed decades ago for the traditional phone network, are out of date and could allow the government to dictate rates or force them to open up their infrastructure to competitors.

Pai says investment has declined by more than $2 billion in the two years that the net neutrality rules and reclassification of broadband have been on the book. Several broadband companies say they would have invested more if not for the overhang of the so-called Title II broadband classification.

Comcast blames the new regulation for slowing the pace of some service deployment.

"It was that misguided thinking that stunted the rollout of Comcast's Stream TV, an in-home, IP-based cable service, which was stalled from a broad consumer rollout because of an unnecessary protracted FCC investigation," David Cohen, a senior executive vice president, said in a blog post-Wednesday.

Net neutrality supporters say they don't buy this argument. In an interview with CNET earlier this week, Clyburn said that as far as she can tell broadband companies haven't indicated concerns to shareholders.

"I haven't seen a credible neutral report that proves that premise," she said. "I have not heard on earnings calls nor have I seen any SEC filings that have pointed to Title II and the 2015 rules being a negative factor when it comes to their investments or their return."

What's next
Republicans in Congress are starting to feel the heat from the public outcry in support of net neutrality. Many back Pai's proposals to roll back the rules, but say new legislation is needed to protect net neutrality. Senate Majority Leader Mitch McConnell said the FCC would "return the internet to a consumer-driven marketplace free of innovation-stifling regulations."

But it may be difficult to get Democrats on board. Sen. Ed Markey from Massachusetts said last week that he isn't considering a legislative path yet. He believes the current law gives the FCC authority to regulate and protect an open internet. Instead, he intends to "stand side-by-side" with internet companies and public interest groups that plan to sue the FCC once the rules are published in the Federal Register early next year.

In her statement before the vote, Clyburn also offered net neutrality supporters hope.

"What saddens me is that the agency that is supposed to protect you is abandoning you," she said. "But what I am pleased to be able to say is the fight to save net neutrality does not end today. This agency does not have the final word."

Tech Culture: From film and television to social media and games, here's your place on the lighter side of tech.

'Alexa, be more human': Inside Amazon's effort to make its voice assistant smarter, chattier and more like you.