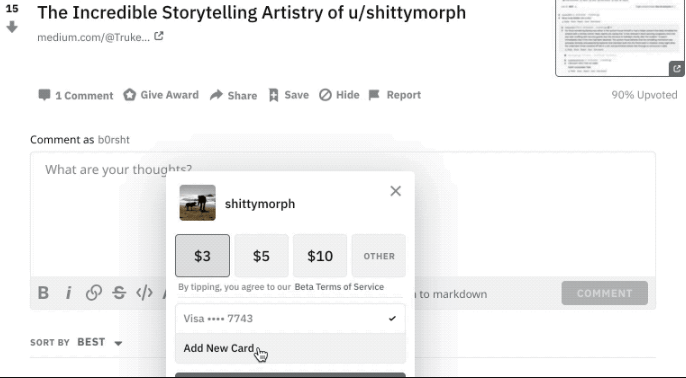 Works until further notice for only one user.

Works until further notice for only one user.

If you often visit the Reddit community then you have probably noticed that one can give each other gifts in the form of gold and, in the future, platinum and silver, where these are bought for real money, but the recipients receive only as a symbol of honor and honor.

Only one user has the feature enabled
Now the community is on the way to making a change that can change it for good: Reddit introduces the opportunity to give each other tips in the form of real money where those on the other end actually receive the money.

So far, there is only one user on the entire social networking site that has the feature enabled - namely the user shittymorph who has, in a way, become a celebrity on the platform over the years. He has his own subreddit where the subscribers can enter and donate money gifts to the person, as illustrated below:

Not guaranteed
To the Engadget, a Reddit spokesman often says they are running experiments like this to potentially implement it on the site while insisting that it does not necessarily mean that the feature is guaranteed to be baked.

Takes a large share yourself
Anyone who follows r/shittymorph can enter and find a comment from the user which they can then press the "tip" button on to give a gift of money with the standard gifts of 3, 5 and 10 dollars, as well as the ability to enter a specified amount - up to $ 100.