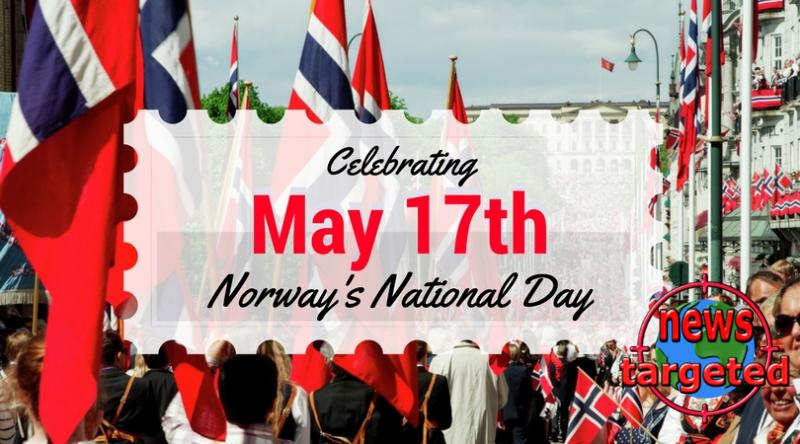 Constitution Day is the national day of Norway and is an official public holiday observed on May 17 each year. Among Norwegians, the day is referred to simply as syttende mai ("Seventeenth May"), Nasjonaldagen ("National Day") or Grunnlovsdagen ("Constitution Day"), although the latter is less frequent.[1]

The celebration of this day began spontaneously among students and others from early on. However, Norway was at that time in a union with Sweden (following the Convention of Moss in August 1814) and for some years the King of Sweden and Norway were reluctant to allow the celebrations. For a few years during the 1820s, King Karl Johan actually banned it, believing that celebrations like this were, in fact, a kind of protest and disregard—even revolt—against the union.[2] The king's attitude changed after the Battle of the Square in 1829, an incident that resulted in such a commotion that the king had to allow commemorations on the day. It was, however, not until 1833 that public addresses were held, and official celebration was initiated near the monument of former government minister Christian Krohg, who had spent much of his political life curbing the personal power of the monarch. The address was held by Henrik Wergeland, thoroughly witnessed and accounted for by an informant dispatched by the king himself.

After 1864 the day became more established when the first children's parade was launched in Christiania, at first consisting only of boys. This initiative was taken by Bjørnstjerne Bjørnson, although Wergeland made the first known children's parade at Eidsvoll around 1820. It was only in 1899 that girls were allowed to join in the parade for the first time. In 1905, the union with Sweden was dissolved and Prince Carl of Denmark was chosen to be King of an independent Norway, under the name Haakon VII. Obviously, this ended any Swedish concern for the activities of the National Day.

By historical coincidence, the Second World War ended in Norway nine days before that year's Constitution Day, on May 8, 1945, when the occupying German forces surrendered. Even if The Liberation Day is an official flag day in Norway, the day is not an official holiday and is not widely celebrated. Instead, a new and broader meaning has been added to the celebration of Norwegian Constitution Day on May 17.[3]