Developers are haunted by the Year 2000 problem - 14,000 parking machines need to be updated manually

In 1999, there was a real fear that computer systems would cease to function after the transition to 2000.

Quick fix punished
The transition to the new millennium did not cause as many problems as many had feared. Fortunately, the world was preparing for the transition.

But by 2020, the Y2K problem will come back as a ghost and haunt developers. Reason? In connection with the year 2000 problem, many developers had chosen to go for a "quick fix", which now turns out not to go unpunished. 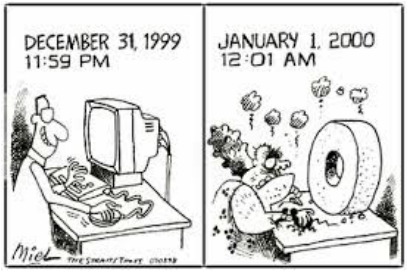 Trouble in New York
Parking machines in New York are among the systems affected by the 20-year-old error. Since the New Year, the machines have not been able to accept card payments due to outdated software. The New York Department of Transportation now has to manually update 14,000 parking machines one by one. The problem has been named "Y2k2X".

Play crashed
The wrestling game WWE 2K20, developed by the studio 2K, was also hit by the bug. When 2020 was a fact, players experienced that WWE 2K20 crashed during boot. Attentive players could tell other players via social media that there was a solution to the problem. By changing the date to December 31, 2019, the problem was gone.

Delayed the problem for 20 years
Laziness is one of the reasons developers got a lot of extra work in the beginning of 2020. In the wake of the fear of the 2000 problem, many developers chose to activate than fast-fixing called "windowing". Instead of rewriting the code completely, developers could have the machine process all dates from 00 to 20, as from the 2000s (to 2020), instead of 1900. About 80 percent of the machines that were fixed in 1999 used this method. What they did in reality was to postpone the problem they wanted to solve until 2020.

- "Windowing" was, even during Y2K, the worst of all solutions because it only exposed the problem, "Dylan Mulvin of the London School of Economics told New Scientist.

- A nightmare
Paul Lomax was responsible for handling the Y2K error on behalf of Vodafone. He calls the situation "a nightmare".

- Fixing errors in old systems is a nightmare. It's like spaghetti and no one who wrote the code is here anymore. They obviously assumed that the systems would be shut down by 2020. It's just like in the 60's - developers didn't even think then that their code would be here until the year 2000.