We wonder what the TV channel thinks about this

The actor and screenwriter shared a pirate version of their own series. 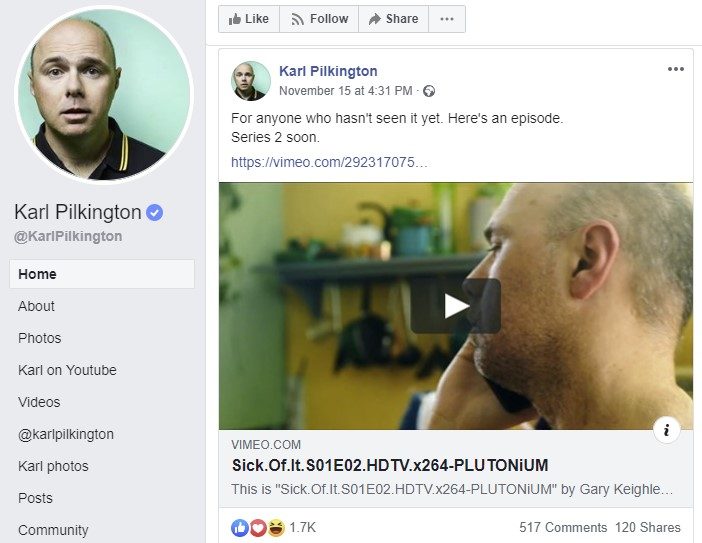 The actor and screenwriter shared a pirate version of their own series.

Season 2 of the sitcom series "Sick of It" will be broadcast on British TV channel Sky One shortly.

In that regard, screenwriter and actor Karl Pilkington have shared an episode of the first season with his over 1.5 million Facebook followers.

"For anyone who hasn't seen it: here's the episode"
But that's a problem. For the series is not sent anywhere for free, you have to pay to stream "Sick of It". However, they did not stop Pilkington from sharing a pirated version of the episode, taken from Vimeo.

“For anyone who hasn't seen it yet; here's an episode. Season 2 is coming soon, ”Pilkington wrote on Facebook. The post now appears to be deleted.

No miss
The video is taken from Vimeo but is actually from a pirate group. It did not go unnoticed with observant fans. Both on Facebook and Reddit several point out that the episode is a pirated episode.

Many people say this is a PR stunt. What is the fascination here we do not know, but the fact is that the well-known TV personality has shared this episode a number of times with his followers. This is not an isolated case.

At the time of writing, the pirated episode is still available on Vimeo. Now it remains to be seen if Sky is doing anything, ie removing the episode. After all, Pilkington is by definition a pirate.