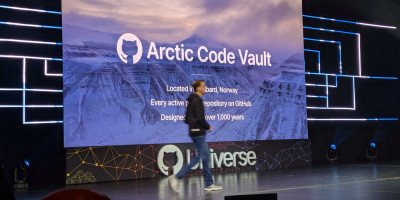 Not far away from Svalbard's global seed vault lies an abandoned coal mine that will now preserve something very special for the future.

Since 2017, Arctic World Archive has stored important and historical content, including documents, films and other types of data that we do not want to disappear from the history books.

Stored in the permafrost - do not fear the climate change
Now the very special archive gets a new member: GitHub.

Three days ago, Microsoft-owned GitHub unveiled the Archive Program, an initiative designed to preserve all of its open source projects for future generations.

The GitHub data is therefore stored in a vault located 250 meters deep into the permafrost in an Arctic mountain on Svalbard, just a stone's throw away from the global seed vault. This is considered a safe area that has good conditions for maintaining important data for humanity.

"Although Svalbard is affected by climate change, the changes are likely to affect only the outermost meters of the permafrost for the foreseeable future. Heat is not expected to threaten the stability of the mine, ”GitHub writes.

May last for 1,000 years
Because of the storage method, which involves soaking film rolls with iron oxide powder, the data should be preserved for the next 1,000 years.

Among the first to be stored there are the source code for Android and Linux, several programming languages, cryptocurrencies and AI tools, GitHub explains on its website.

Uses Norwegian technology
All public package wells on GitHub will be stored in the vault on February 2 next year.

Arctic World Archive is a collaboration between Store Norske Spitsbergen Kulkompani (SNSK) and the company Piql AS, which specializes in long-term data retention.

- We are pleased to be able to work with Piql to help preserve open source software. Piql's custom film and archive technology will allow us to store terabytes of data on a durable medium designed to last for over 1,000 years, says Kyle Daigle, Director of Special Projects at GitHub.

You can read all about the special project on GitHub's website.