The Global Organization of Electrical and Electronics Engineers (IEEE) has chosen to ban engineers from the Chinese company so far, in response to US government foreign policy regulations in recent weeks. The United States has already made it impossible for Huawei to make deals or deals with US companies.

Unclear why IEEE participates in the block
Understandably, many component suppliers or importers in the United States were quick to announce their breaches with Huawei - but it is not quite clear why an independent electrical engineering institute will now also distance itself from the Chinese company.

The news circulated first in Chinese media but was not long after confirmed IEEE. They made the following statement to the case that they:

"... follows US government regulations that limit Huawei's companies and employees from participating in certain activities that are not open to the public. This includes certain aspects of our publishing and editing process ” 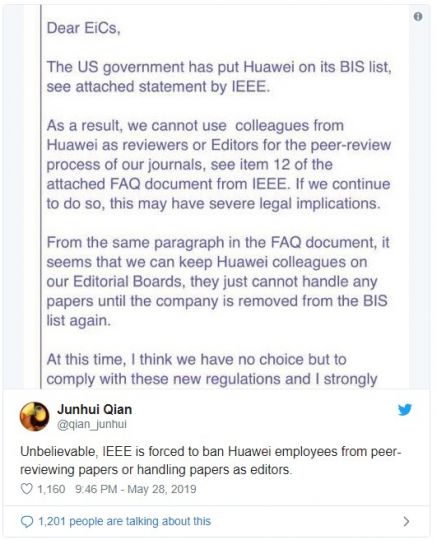 The institute is based in New York, but has a large number of members worldwide electronics industry, mainly in the form of academics and engineering engineers. They are officially apolitical. In the public announcement, they went on to say that violations of the decision "could lead to serious legal consequences" - but at the same time they stated that what is happening now will have minimal effect on its members.

Graduates end in protest
A number of Chinese professors have criticized the IEEE provision. They believe the IEEE should not interfere with individual country foreign policy, and Huawei's professors and engineers should not be penalized for what happens between their own company and the US government. Haixia Zhang who has been a member of the IEEE for years had this to say to the department:

"Like an old IEEE friend, and as a veteran member, I'm really shocked to hear that the IEEE is involved in" the US-Huawei-Ban "[...] this is an attack on my professional integrity. I must say that, as a professor, I cannot accept this. Therefore, I have decided to join IEEE ”

More and more American, but also international, companies have joined the line of those who break all ties with Huawei. Google, ARM, Intel, and Qualcomm are just some of the many on this list.