Google is helping to build another asia-pacific submarine cable

The new undersea fiber-optic cable will Australia, Singapore and Indonesia

Google is investing in another massive undersea fiber-optic cable as a part of its plans to build out network connectivity around the world. The company announced Wednesday that it is helping to fund a project called Indigo, which will connect Jakarta, Singapore, Perth and Sydney to one another.

The cable will run for approximately 9,000 kilometers (almost 5,600 miles) and provide a capacity of roughly 18Tbps (bits per second). It's being built to bring users more connectivity in a region that has growing internet needs.

Google has now invested in five submarine cables in the Asia-Pacific region and seven overall. By investing in these cables, the company hopes to better compete with other cloud providers and consumer internet companies.

Alcatel Submarine Networks will build the cable, and Google expects it to be finished by the middle of 2019. Other Indigo investors include cable company SubPartners and ISPs AARNet, Indosat Ooredoo, Singtel and Telstra.
Only Google and the other investors will be able to use Indigo, though Singtel and Telstra will be able to sell capacity to their customers as part of their telecom businesses.

Google and other users of the cable will be able to expand its capacity with future technology to keep up with growing needs. Indigo has two fiber pairs, one-third as many as the trans-Pacific FASTER cable turned on last year, where Google was also an investor.

Interestingly, Indigo’s roughly 9,000-kilometer run puts it on par with the length of FASTER. It's that long partly because of the curving path it needs to take to connect the four cities along its length. 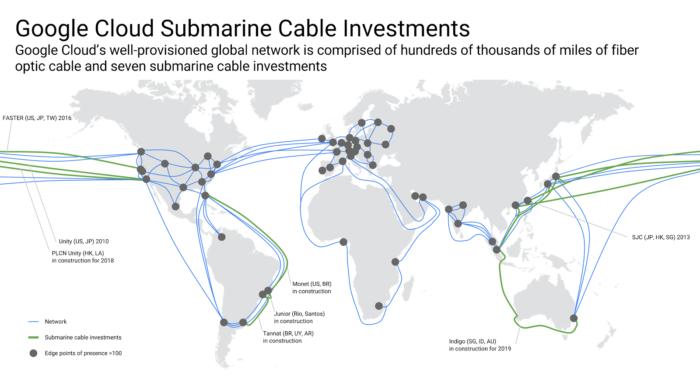