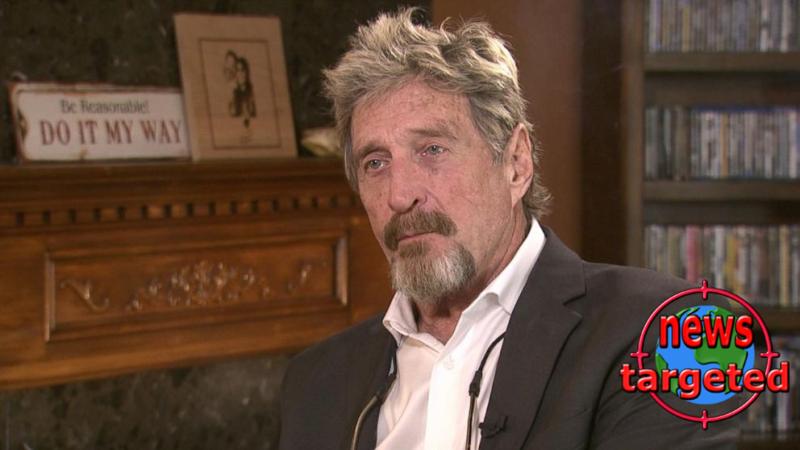 Now he's released. - They treated me well, but it's time to move on now, writes the entrepreneur on Twitter.

Now he's released. - They treated me well, but it's time to move on now, writes the entrepreneur on Twitter.

John McAfee is first and foremost known as the founder of McAfee Antivirus, the company that sold to Intel for $ 58 billion in 2011, McAfee left the company in 1994.

Called by the authorities
But he has also been in the media spotlight for quite different reasons in the past. Among other things, he has been on the run since 2012 after being suspected of being involved in a murder in Belize. McAfee has constantly denied having anything to do with the murder. Later, Belize authorities have made it clear that McAfee is not charged, but that he has always been a "person of interest".

Was held under house arrest
These days, however, he is best known for being a presidential candidate in the United States. But this week, McAfee should have disappeared without a trace. The head of his presidential campaign, Rob Benedicto Pacifico Juan Maria Loggia-Ramirez, announced yesterday that McAfee had been arrested by police. Now the AP news agency writes that he has been released.

Read also: Here ITavisen talks with John McAfee - this is his doomsday prophecy

Found weapons and ammunition
The founder was arrested by armed forces in the Dominican Republic on Tuesday when he was to park his yacht in Puerto Plata. During the arrest, the forces should have found several high-caliber weapons and ammunition, the AP writes. On July 19, McAfee also posted a photo on Twitter where he posed with guns with his wife.

"John, Janice and his crew are alive and in the process of being released," Loggia-Ramirez wrote on Twitter.

“I was treated well. My superiors were friendly and helpful. But now it's time to move on, ”he writes on the site.

“We are safe and on our way to the airport. Thank God!".

- Propaganda
John McAfee has repeatedly denied being involved in crime. Last week, his account posted a tweet claiming that his only criminal act has been to not "submit the tax return".

"The rest is propaganda by the US government in an attempt to silence me."

He claims that he is running in the 2020 presidential election on a cryptocurrency-based platform and that he has developed a crypto wallet that is "impossible to hack".