PSA: You now have only 4 days left to get a free upgrade to Windows 10 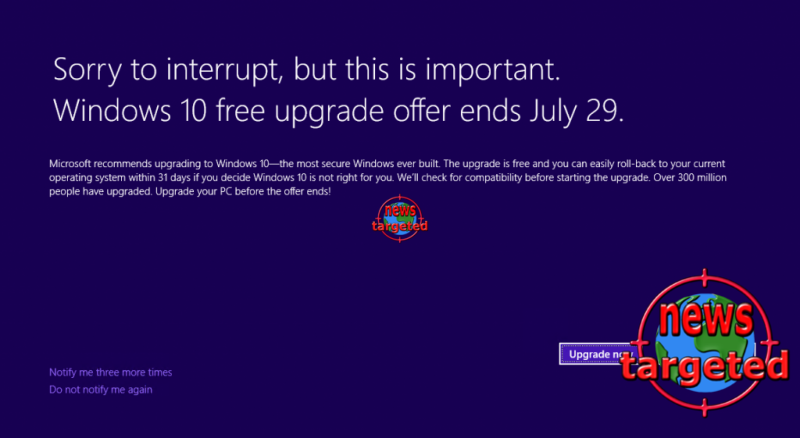 On July 29, 2015, the era of Windows 10 officially began, and Microsoft formally commenced its offer of a free upgrade to the new OS for owners of Windows 7 and 8.1 PCs.

On July 29, 2015, the era of Windows 10 officially began, and Microsoft formally commenced its offer of a free upgrade to the new OS for owners of Windows 7 and 8.1 PCs. That offer was only ever intended to last for the first year after Windows 10's launch - and while some speculated that it might provide an extension, Microsoft confirmed in May that it will indeed end on July 29, 2016.

That means that if you're considering taking advantage of the free upgrade offer, you now have just one week left to do so. If you don't, and you later decide that you wish to upgrade your existing PC to Windows 10, there will be no 'discounted' upgrade pricing available, as there was for some previous Windows versions; instead, you'll have to buy a full OS license, priced from $119.

There is a way for you to 'reserve' an upgrade to Windows 10 for after that date - an option to consider if you're really happy living with Windows 7 or 8.1 for now, but you want to keep your options open for moving to Windows 10 at some point in the future - but that option will still require you to take action before July 29.

And of course, you can always just buy a new PC with Windows 10 onboard after July 29, and the price of the OS license will be factored into the total cost of the machine - but it will be tied to that device.

Given the many improvements that Microsoft has lined up for its Windows 10 Anniversary Update - which will begin rolling out on August 2 - it might well be worth considering the upgrade before next week's deadline passes.

By the way, it's also worth noting that the free upgrade offer won't end on July 29 for those Windows Phones eligible to upgrade to Windows 10 Mobile. Microsoft still won't say when the offer for phoneswill end (we have asked - repeatedly), but suffice it to say there's no immediate rush.

That said, even Microsoft has little interest in Windows Phone 8 and 8.1 these days. It said this week that it won't even support Skype on those operating systems from this October, so there seems little point in sticking with those older versions if you have the option to upgrade to Windows 10 Mobile.