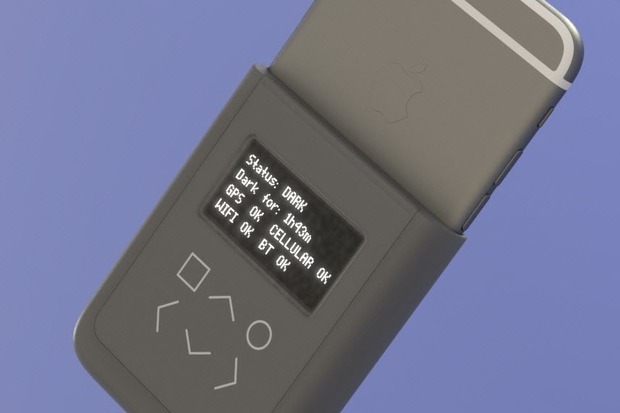 National Security Agency whistleblower Edward Snowden has come up with a concept iPhone case that could prevent the government from finding your location.

Smartphones, while incredibly useful, are also the “perfect tracking device,” Snowden wrote in a co-authored paper that covers his research.

Governments can monitor a user’s location through the radio signals from the phone and this can put journalists, activists, and rights workers in danger, he warned.

On Thursday, Snowden and hacker Andrew Huang presented a possible solution. It’s called “the introspection engine,” and it’s designed to alert the user if and when the phone’s radio signals are turned on.
That may sound trivial. Smartphones generally come with an airplane mode that can turn off a phone’s cellular and WiFi connections.

But even that can be misleading, Snowden warned. The GPS, for instance, will still remain active on some handsets, like the iPhone. In the worst-case scenario, malware could also infect the handset to secretly send radio transmissions, he added.

Snowden’s solution is designed to detect any errant phone signals when the handset is switched into airplane mode.

His concept functions like a battery case that can attach to an iPhone, but it also wires into the handset’s SIM card slot. A small computer in the case will then detect the handset’s radio transmissions.

Any unusual activity can trigger an alarm. A small display embedded on the case can also show updates.

To guarantee that no signals are sent out, the case could also built with a “kill switch” that disconnects power to the phone.

Snowden said that he designed the technology to help protect reporters working in dangerous situations.

“Unfortunately, journalists can be betrayed by their own tools,” he added. That may have happened in 2012, when U.S. reporter Marie Colvin was killed while covering the Syrian civil war. A lawsuit alleges that the Syrian government assassinated her by tracking Colvin’s satellite phone communications to find her location.

Snowden's introspection engine, however, is still just a concept. He hopes to develop a prototype over the coming year. The technology will be open source and is meant to easily be applied to other phone models.

He and Huang, who authored a book on hacking the Xbox, presented their paper on Thursday at the MIT Media Lab, with Snowden speaking on video from Russia.