Here's how Facebook finds out all the people you've ever met

But you can prevent it.

Have you been surprised by the suggested people who appear in Facebook's "People You May Know" List. You are hardly alone.

But you can prevent it.

Have you been surprised by the suggested people who appear in Facebook's "People You May Know" List. You are hardly alone.

Surprising friend suggestions
Gizmodo has investigated how "People You May Know", or just PYMK, on Facebook and has come across some surprising findings. The site has heard of several incredible stories about people who have appeared under suggested friends without having exchanged any kind of information at all.

For example: "A man who secretly donated semen to a couple so they could have a child. Later, Facebook recommended the child as a person he might know. He still knows the couple, but is not friends with them on Facebook, "writes Gizmodo.

"Such stories seem inexplicable if you assume that Facebook only knows what you've said about yourself. They are less mysterious if you know if the other file Facebook has stored about it - you can not see or control. "

Creates shadow profiles
There is another profile about you in addition to the one you have created yourself. The website explains that these are called "shadow profiles" and are made based on inboxes and smartphones of other Facebook users.

"Contact information you have not shared with the network will be associated with your account, which will make it easier for Facebook to map your social actions," explains Gizmodo.

These shadow profiles have been known for a while now, but not everyone knows how far they go and how they are used. Also, Facebook does not want to confirm how some PYMK links take place. A spokesman for the company says to Gizmodo that there may be "common friends" or people who are "in the same city or network".

You can prevent it
The first step towards creating a shadow profile occurs when you create a Facebook account and the social media suggests that the user can find friends through their email account. The network writes that "The information about your friends will be sent to Facebook to help you and others find friends easier." Pressing "learn more" gives you more information on how this happens. The social media stores information about your contacts that include: name, nickname, phone number, relationship, and occupation.

"If you want to share your contacts, all of the information you are in possession of will be sent to Facebook and the network will then use the information to find links between everyone you know, no matter how small and you will not notice it" writes Gizmodo.

PS. Imported contacts can be deleted via Find friends - Add personal contacts - See how it works - Remove them permanently. 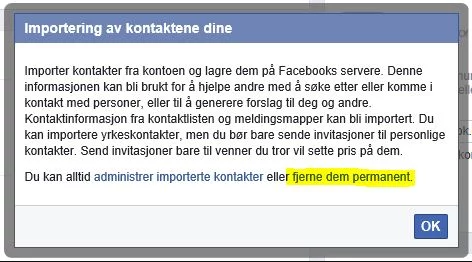 In terms of contact information about you as others have uploaded, Facebook believes that it is not considered your information. "It belongs to the one who uploaded it and they are the only ones who control it," writes the site. Still, there is one thing you can do. Under the privacy settings on Facebook, you can prevent people from finding your profile knowing by searching by phone number or email address.

You will find more information about Gizmodo's findings in the Source Label.