Now Anyone Can Embed a Pirate Movie in a Website

Vodlocker.to is offering an interesting service that not only provides streaming movies and TV shows in the browser but also allows them to be published anywhere on the web. After entering the movie's IMDb number, users get an embed code which can be entered into any web page, where the movie will play in a YouTube-like window. There's even support for Chromecast.

Vodlocker.to is offering an interesting service that not only provides streaming movies and TV shows in the browser but also allows them to be published anywhere on the web. After entering the movie's IMDb number, users get an embed code which can be entered into any web page, where the movie will play in a YouTube-like window. There's even support for Chromecast.
While torrents are still the go-to source for millions of users seeking free online media, people are increasingly seeking the immediacy and convenience of web-based streaming.

As a result, hundreds of websites have appeared in recent years, offering Netflix-inspired interfaces that provide an enhanced user experience over the predominantly text-based approach utilized by most torrent sites.

While there hasn’t been a huge amount of innovation in either field recently, a service that raised its head during recent weeks is offering something new and potentially significant, if it continues to deliver on its promises without turning evil.

Vodlocker.to is the latest in a long list of sites using the Vodlocker name, which is bound to cause some level of confusion. However, what this Vodlocker variant offers is a convenient way for users to not only search for and find movies hosted on the Internet, but stream them instantly – with a twist.

After entering a movie’s IMDb code (the one starting ‘tt’) in a box on the page, Vodlocker quickly searches for the movie on various online hosting services, including Google Drive. 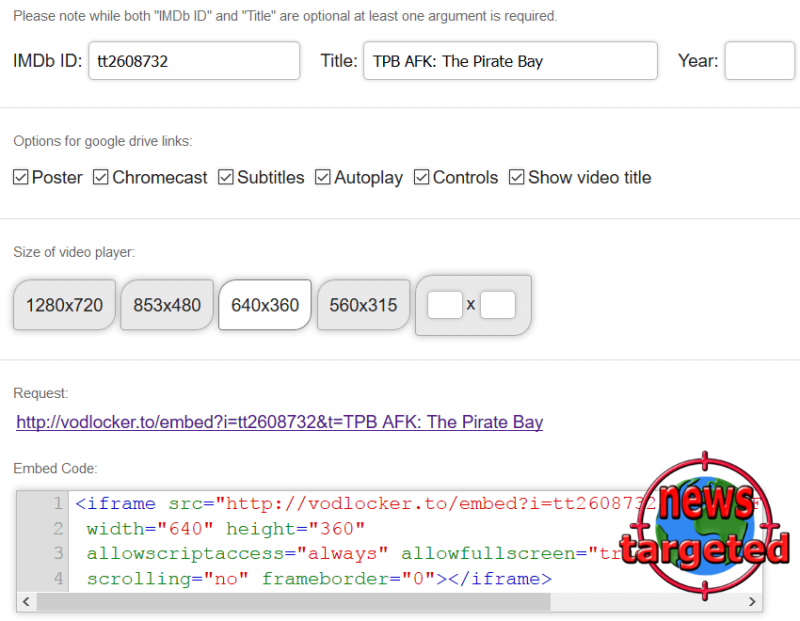 “We believe the complexity of uploading a video has become unnecessary, so we have created much like Google, an automated crawler that visits millions of pages every day to find all videos on the internet,” the site explains.

As shown in the image above, the site takes the iMDb number and generates code. That allows the user to embed an HTML5 video player in their own website, which plays the movie in question. We tested around a dozen movies with a 100% success rate, with search times from a couple of seconds to around 20 seconds maximum.

A demo on the site shows exactly how the embed code currently performs, with the video player offering the usual controls such as play and pause, with a selector for quality and volume levels. The usual ‘full screen’ button sits in the bottom right corner.

Near the top of the window are options for selecting different sources for the video, should it become unplayable or if a better quality version is required. Interestingly, should one of those sources be Google Video, Vodlocker says its player offers Chromecast and subtitle support.

“Built-in chromecast plugin streams free HD movies/tv shows from your website to your TV via Google Chromecast. Built-in opensubtitles.org plugin finds subtitles in all languages and auto-selects your language,” the site reports.

In addition to a link-checker that aims to exclude broken links (missing sources), the service also pulls movie-related artwork from IMDb, to display while the selected movie is being prepared for streaming.

The site is already boasting a “massive database” of movies, which will make it of immediate use to thousands of websites that might want to embed movies or TV shows in their web pages.

As long as Vodlocker can cope with the load, this could effectively spawn a thousand new ‘pirate’ websites overnight but the service generally seems more suited to smaller, blog-like sites that might want to display a smaller selection of titles.

That being said, it’s questionable whether a site would seek to become entirely reliant on a service like this. While the videos it indexes are more decentralized, the service itself could be shut down in the blink of an eye, at which point every link stops working.

It’s also worth noting that the service uses IFrame tags, which some webmasters might feel uncomfortable about deploying on their sites due to security concerns.

The New Vodlocker API demo can be found here, for as long as it lasts.