It's been almost a year since KickassTorrents was taken down by the U.S. Department of Justice. The criminal investigation resulted in the arrest of the alleged owner and seizure of several domain names.

It's been almost a year since KickassTorrents was taken down by the U.S. Department of Justice. The criminal investigation resulted in the arrest of the alleged owner and seizure of several domain names. Interestingly, one of the domains that was supposed to be seized 'escaped custody,' and is now for sale.
Last summer a criminal investigation by the U.S. Government brought down KickassTorrents, the largest torrent site at the time.

Upon request from the United States, law enforcement in Poland arrested Artem Vaulin, the alleged owner of KickassTorrents, who’s been held in a local prison ever since.

In addition, the U.S. Department of Justice (DoJ) also went after six domain names that were tied to the site, including KickassTorrents.com, Kat.cr, Kickass.to and Kat.ph. However, it appears that not everything went as planned.

While seizing U.S. linked domains including the .com was relatively easy, the Philippine .ph domain was never seized. 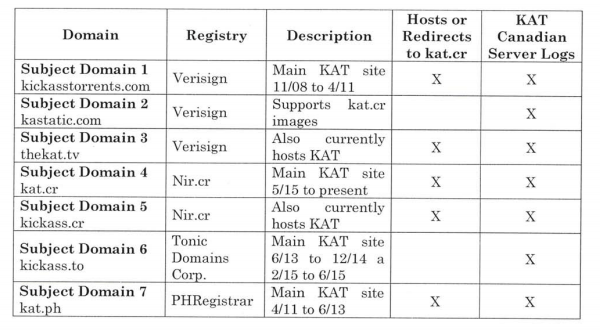 In the legal paperwork, the DoJ mentions that the foreign registries would be approached through a Mutual Legal Assistance Treaty, and asked to point the domains to servers controlled by Homeland Security Investigations.

“The seizure warrants for the remaining Subject Domains will be sent through Mutual Legal Assistance Treaty requests to Costa Rica, Tonga, and the Philippines to seize and redirect the name server to an HSI-owned server.”

This did indeed happen for Kickass.to but KAT.ph was never properly seized. On the contrary, the owners let it expire after which the registrar Dynadot auctioned it off. This allowed a third-party company to pick it up without trouble.

TorrentFreak spoke to the new owner of Kat.ph, who bought the domain name for a little over $9,000.

He explains that his company Marshall Domains LTD specializes in buying domains names that are expected to generate a decent amount of traffic. They buy all sorts of domains, which they monetize through Google advertising feeds.

The KAT.ph domain wasn’t a great investment though. In terms of traffic, it’s a winner. The domain had more than 700,000 unique visitors over the past month, mostly people looking for the old KickassTorrent site. However, it is banned from Google’s ad services.

There are other advertising options, but those are pretty scammy and not an option for the new owner.

“I’m not really happy with sending my traffic to these feeds. They get good results, but it’s all spammy, malware installing crap. I don’t want to be associated with this form of monetization,” Mr. Marshall informs TorrentFreak.

Instead, he has decided to put the domain up for sale, and it’s currently availble for at least $7,000. This means taking a loss, but at the moment the domain isn’t generating any income.

Thus far there hasn’t been many offers from potential buyers. Funnily enough, most inquiries come from former KickassTorrents users who missed the shutdown and are wondering where the site went.

“I’ve had some interest, but mainly from people asking to download things or where KickassTorrents has gone, but I just ignore these,” Mr. Marshall says.

Perhaps the Department of Justice might want to buy it after the failed seizure? If only to prevent it from being used by KAT knockoffs in the future…