Several live events on Facebook have shaken the world lately. Among other things, more killing has been shown on the social media, including a man in Cleveland who broadcast on Facebook that he shot and killed a stranger. Before Facebook had removed his videos, it would have been two hours.

A video of a man in the 20s who kills his eleven-month-old daughter was also broadcast on Facebook. The man took his own life after the camera was switched off.

- Have to act faster
On Facebook's Facebook profile, Facebook manager Mark Zuckerberg admits that the company has to handle such events faster. He writes that it's heartbreaking to watch videos on Facebook by people who hurt themselves and others.

"If we are to build a secure community, we need to act faster. We will make it easier to report such videos so we can respond quickly if someone needs help or by removing a post. "

large Recruitment
As part of this, Facebook will employ 3,000 people in the coming year. In addition to flagging videos, these will also remove and report content that does not belong to the platform. It includes hateful expressions and exploitation of children. 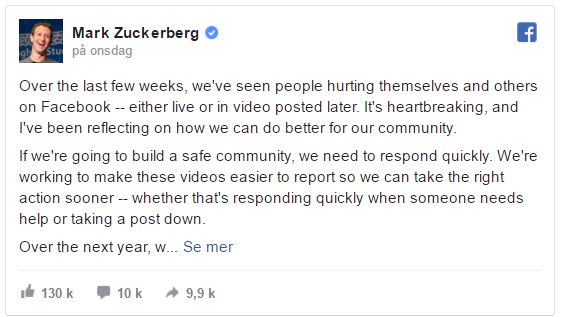