Four people, including an armed police officer and a man believed to be the attacker, have died in a terrorist incident near the UK's Houses of Parliament, Scotland Yard has said.

Four people, including an armed police officer and a man believed to be the attacker, have died in a terrorist incident near the UK's Houses of Parliament, Scotland Yard has said.

A woman was among several pedestrians struck by a car on Westminster Bridge, before it crashed into railings.

Police said an officer protecting Parliament was stabbed by an attacker, who was shot by police.

At least 20 people were injured, including three other officers.

Acting Deputy Commissioner and head of counter terrorism at the Metropolitan Police, Mark Rowley, said a major terrorist investigation was under way.

He said the attack started shortly before 15:00 GMT when the car was driven over Westminster Bridge, hitting and injuring a number of members of the public - including the three police officers, who were on their way back from a commendation ceremony.

Mr Rowley said after the car crashed, a man armed with the knife "continued the attack and tried to enter Parliament".

Witnesses say there was what appeared to be a warning shout and then the crack of three or four shots before the attacker fell to the floor.

Prime Minister Theresa May is to chair a meeting of the government's emergency Cobra committee later.

Speaking ahead of the meeting, a Downing Street spokesman said: "The thoughts of the PM and the government are with those killed and injured in this appalling incident, and with their families."

Metropolitan Police Federation chairman Ken Marsh said: "We offer our deepest sympathy to the family of the officer who has died. This incident shows the dangers our colleagues face on a daily basis."

The French Prime Minister Bernard Cazeneuve said three French school pupils were among the injured and offered "solidarity with our British friends, and full support" for the wounded students and their families.

The Port of London Authority said a woman has been pulled alive from the River Thames near the bridge and was being treated for serious injuries.

The incident outside Westminster is exactly the kind of scenario that security chiefs have been planning for.

It looks like the type of attack jihadis have wanted to carry out in Britain - namely attacking people with a vehicle and taking on the security forces with knives.

In the security services' jargon this is known as a "marauding attack" and is the hardest type of terrorist incident to predict and defend against. That means casualties, as we have seen in Nice and elsewhere, are inevitable.

But what matters just as much is how the police then respond.

Armed police at Parliament were able to stop the attacker. Within minutes, Westminster was flooded with more armed officers, including counter-terrorism specialists.

Inside Scotland Yard, teams of detectives began working on the next critical phase - establishing the suspect's movements, whether he acted alone and, in tandem with their colleagues on the street, making sure London is as secure as it can be in light of these awful events.

Westminster remains locked down and it will remain so until Scotland Yard is certain the threat has been contained.

As Parliament was put into lockdown, MPs said they were told to stay inside their offices.

Parliamentary authorities say both the House of Commons and Lords will sit at their usual times on Thursday.

The White House said later that Mrs May had spoken to President Donald Trump about the attack. 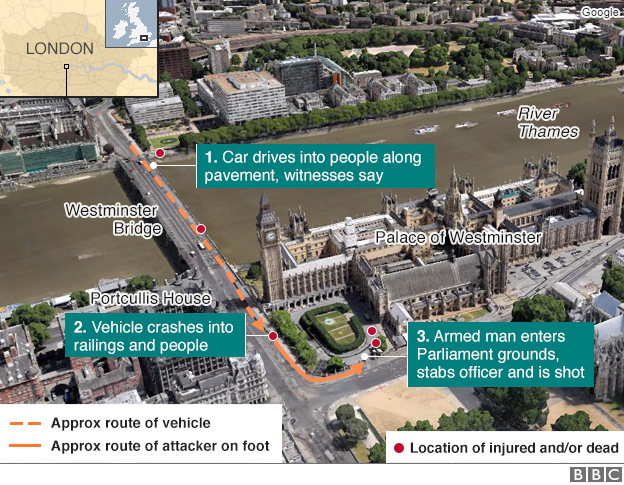 "I heard shouts and screams from outside and looked out, and there was a group of maybe 40 or 50 people running round the corner from Bridge Street into Parliament Square.

"They appeared to be running away from something."

"As the group arrived at the Carriage Gates, where policemen are posted at the security entrance, a man suddenly ran out of the crowd and into the yard."

'Mowed down'
An eye witness, Radoslaw Sikorski, a senior fellow at Harvard's Centre for European Studies, posted a video to Twitter showing people lying injured in the road on Westminster Bridge.

He wrote: "A car on Westminster Bridge has just mowed down at least 5 people."

Transport for London said Westminster underground station has been shut at the police's request, and buses were diverted.